ParaVirtualization aware (PV) device drivers are an important part of HVM guests running under Xen. Citrix has provided a set of PV driverfor Windows since the inception of XenServer. These drivers have evolved over the years and recently the full set has been made opensource with a BSD license and are therefore available to the community to modify and build.Paul Durrant gave a talk at the 2013 Xen Developer Summit in Edinburgh (see http://www.slideshare.net/xen_com_mgr/open-source-pv-drivers) tointroduce the drivers. This proposal is intended to be a logical next step to that initial offering to the community.

Relevance to Xen and its Community

The drivers have a dependency on Xen as they are ParaVirtualization aware. They are not tied in any way to Citrix commercial Xen offerings;they are designed to function on any build of Xen since 3.4. They encompass high performance network and storage frontends and enablefunctionality such as memory ballooning, and clean shutdown or reboot via the xl toolstack. They are well tested and supported, since theyare crucial to Citrix products, and are of benefit to anyone wishing to run Windows (i386 or x86_64) as a guest under Xen.

Recent builds of the drivers are currently being tested by Citrix and Amazon using the Microsoft HCK and Citrix will be providing logo-signed builds of the drivers in future commercial Xen offerings. Amazon are evaluating the drivers and may ship them in future AMIs.Citrix may also provide logo-signed drivers via Microsoft's Windows Update mechanism, making them widely available to anyone runningWindows under Xen (not just XenServer) without the need for them to build the drivers themselves. Any other organization is also free to dothe same by registering a top level PV device with the Xen community (see pci-device-reservations.txt) and logo-signing their driver builds.

The aim of making the Windows PV Drivers an incubated project is to raise their profile to members of the Xen community other than Citrixand Amazon and hopefully gain more developer interest and contribution. The driver set provide APIs to fundamental Xen subsystems suchas grant tables, event channels and xenstore and therefore provide a basis for further frontends, e.g. HID (keyboard and mouse), PV audioand possibly framebuffer. Current maintainers of the driver repositories are all employed by Citrix but by becoming an incubated project wehope gain maintainers from the community as we build interest.We hope we can work with the maintainers of the GPLPV Windows Drivers to standardize Windows PV drivers for the Xen project.

As a Xen Project sub-project we would wish the driver repositories to be hosted on xenbits, but mirrored to GitHub to allow use of the theGitHub workflow. It makes sense to maintain a separate repository for each driver as:Each driver is separately installable with no compile-time linkage to any other driver. Some headers may be imported from onerepository to another to facilitate run-time discovery of interfaces provided by one driver and consumed by another, but it is desirablethat this is an explicit step to move from one version of an interface to another.A continuous integration server project can be created for each repository such that the only a modified driver is re-built, rather thanthe entire set.

The set of drivers (and hence repositories) is currently: 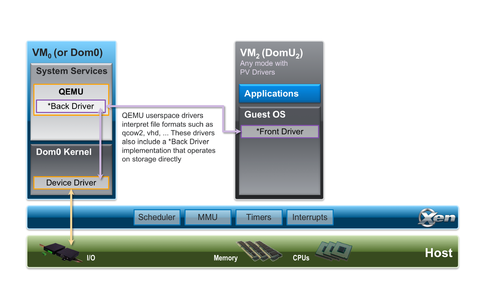 We request build infrastructure to make new builds of driver repositories immediately available for use by community members. This includes: